Fukushima – Before and After 3/11 – The Japanese town where Graham taught is less than 40 miles from the Fukushima Dai-Ichi nuclear plant. Following the March 2011 tsunami, Graham reached out to old friends to find out what had happened to the place he’d once lived and worked.

Remembering a Very Different December 7th   – Graham recounts the story of a memorable Pearl Harbor anniversary he spent as a guest at a Christmas party in a Japanese elementary school.

Crime and Joy – Japanese Teens Write About America – While living in Ishikawa, Graham visited a class of high school seniors and asked them to answer this question – in English: What is your image of America?

How I Learned about America by Moving to Japan – At 23, there was one big question Graham couldn’t figure out: What is America, anyway? He found his answer in an unlikely place far from home.

Japanese Stories, Workshops and Educational Programs
(Some of these appear on other pages in this site.)

In Japan, Graham collected stories you’ve never heard and will scarcely believe. Stories include information about Japanese language and culture and include ancient folk tales like “The Inch-High Samurai” and “Three Strong Women” (ancestors of today’s manga and anime). Graham also offers personal experience stories like “The Japanese Basketball Trophy” and “The Attack of the Japanese Pre-Schoolers,” which is shown in this video: 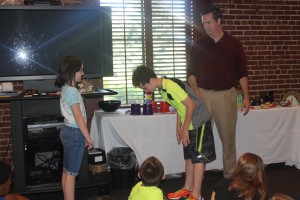 In today’s economy, the ability to create and maintain connections with people from different countries and cultures is an essential skill. Still, some students (and teachers) struggle to find common ground with the people in their own classrooms. Learn to Bow is a lively and engaging presentation that focuses on strategies and ideas designed to help students and teachers relate to people from diverse cultural backgrounds. Graham Shelby will facilitate the workshop, which will include the stories, insights and strategies for success that he learned from spending three years as a teacher in Japan.

Dracula is done. Werewolves are weak. And Freddy Kruger? Ho-hum. Today’s kids have seen it all in terms of scary stories – or at least they think they have. But they don’t knowkaidan –ghost stories as told in Japan. This Halloween, give your students a multicultural experience – and a scare unlike any they’ve ever had – with kaidan featuring Japanese demons, sea monsters, shape-shifters and ghostly samurai who seek revenge from beyond the grave.  Kaidan – what your students don’t know could scare them. Here’s one story from Graham’s Kaidan collection:

THE WARRIOR’S DAUGHTER –  In this ancient Japanese tale, Etsuko is a teenage girl learning tea ceremony, calligraphy and how to look good in a kimono. Then her father, a samurai, disappears and Etsuko decides to find him.

The Boy Who Drew Cats  – Taro is alone as he faces a giant rat demon that’s been terrorizing the countryside. Taro’s only weapon: ink.